It has been a crazy, hardworking summer, taking up many evenings and weekends, with the payoff of assistant and I having developed a faster, better method of handling starter collections by zigzagging between two softwares (we had eleven new school libraries to stock ... seven are now finished, one in progress, and three to go! (assistant and I are now anticipating the luxury of watching those last three pretty much build themselves now that we've done all the extensive set-up work ... Yay!)

So celebrating the return of some of my leisure time by getting a VERY overdue haircut this morning (my hair has been at the maximum length it will grow for several months ... it's now hacked back to above my shoulders and has currently curled/waved so much from being relieved of its own weight that it appears to be merely jaw-length). From the hairdresser's I made an expedition out to The Loop because I haven't been there in ages and they are the best place in town to get a hands-on indie yarn fix. I might have wavered on this and cancelled due to today being grey and rainy but, while checking their website to make sure they were still in the same location, I discovered they'd just received a shipment of Wollmeise! You who aren't knitters (or crocheters) won't get the significance of this but let me assure you that Wollmeise is a Very Big Deal. People make pilgrimages to the Wollmeise store in Germany; they plan vacations around getting there (the store is in a small town on the road between Munich and Nuremberg and has very limited open days/hours). There's an online store but it sells out very fast after each update and then there's the cost of overseas shipping. So definite incentive to get over there in hope of acquiring some of this treasure.

And the loot is: two balls of my beloved Crazy Zauberball in a new colourway called "Piano Bar", two skeins of Yarn Ink (a fairly new local dyer's work) in "Flight of the Hummingbird" and "White Queen" colourways. And two magnificent skeins of Wollmeise Lacegarn in "Nobody is perfect: Vamp" and "Emil" 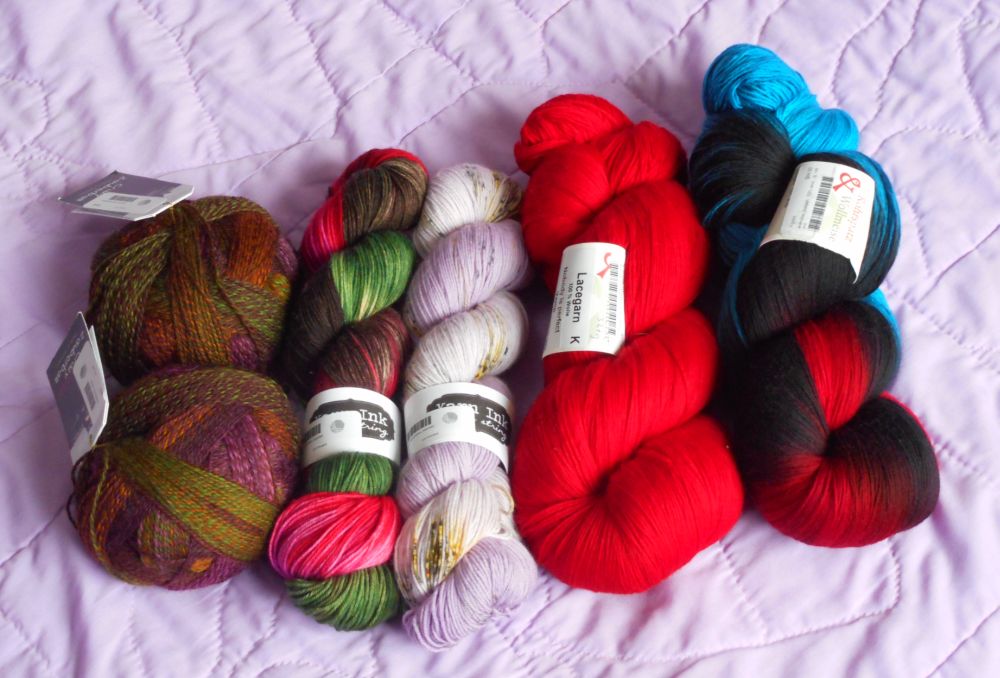