Been a while since I got a box full o' yarn in the mail. This is five skeins of Colinette Jitterbug, a merino wool so smooth it feels like satin and plied so tightly that the ply lines look horizontal like the segments of a millipede instead of the usual diagonal-appearing twists (I've been told that this is called Z-plying by those far more knowledgeable about spinning) ... this makes it so super-squooshy and springy that Tigger's tale is a soggy limp noodle in comparison (the Colinette website likens it to a Slinky and that's pretty accurate). All that and super-saturated colours.

I have a long-standing love for Jitterbug (the socks I've made from it have been my faves to wear out of all the socks I've knitted) but it's always been very difficult to get in Calgary ... the company dyes about 150 colourways and every yarn store in town would, for years, always have the same half dozen colours and nothing more. And I don't mean each store had stocked the same half dozen colours but each store had a different range, I mean the same half-dozen colours were in all the stores here. Blaming the Canadian distributor for that (Colinette is based in Wales), or at least the rep for Alberta ... for some reason this limited palette was all that they offered to the shops. But the times they are a'changing ... Colinette has decided to be its own online yarn store selling direct to knitters and no longer distribute through other retailers. So when shops sell out their current stock, that's it. Happily for my postal rates, one store in Ontario somehow got hold of a motherlode of Jitterbug stock around the time Colinette made their announcement and I think they're buying up from other shops because they keep managing to add limited quantities of more colourways to their we-can't-get-any-more-of-this-yarn supply. So I've been happily keeping an eye on their online inventory and adding to my stash while I can still do it without involving customs.

So I now own one skein apiece of "Purple Passion", "Lichen", and "Velvet Plum" and two skeins of "Pharoah". Surprise extras also crammed into the box were three Jitterbug mini-skeins (unlabeled but I've identified the colourways as, left to right, "Ayshia", "Slate", and "Frangipani"), two sample packets of Soak (a wool wash), and a store promo button.

Now all I need is time to knit all the things! 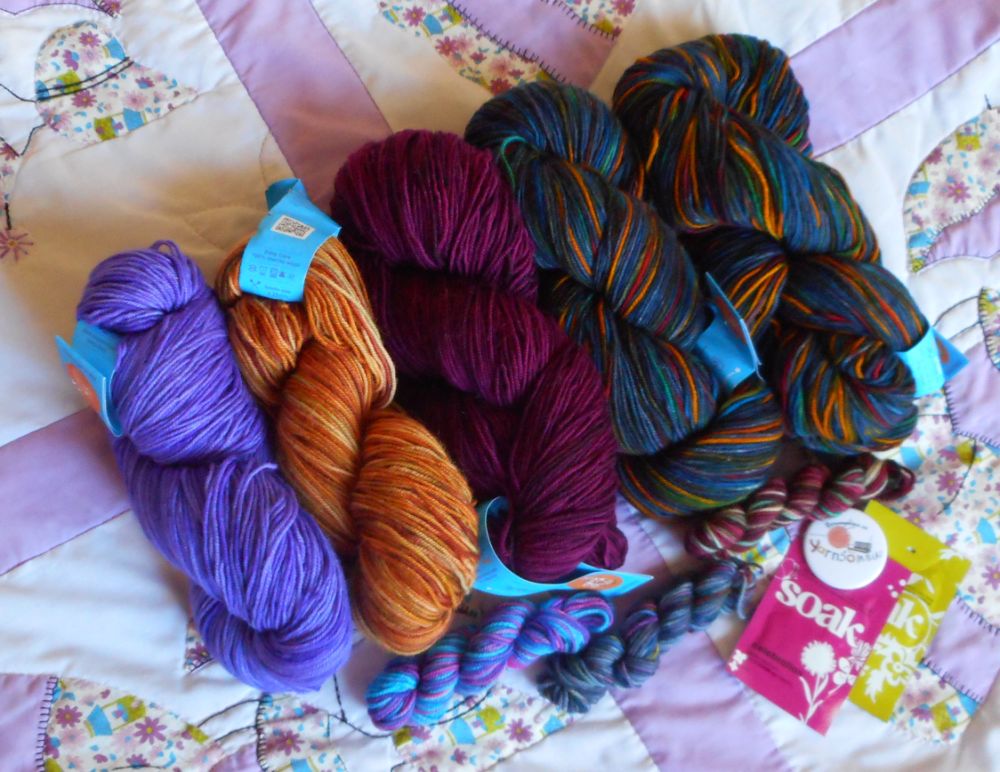