That weird occasional beep that seemed to be emanating from my computer (installed Windows 10 a few days ago and the machine has been making a few unfamiliar sounds for different processes) was actually the new cell phone, sitting in its box on top of the desk next to one of the monitor's speakers and complaining of imminent power failure. Cue JLS turning the damned phone 'round and 'round trying to find where the hell one plugs in the charger (c'mon, my previous phone was from 2003 and had a jack, not a USB port ... I'm dealing with a massive technology leap here). Did figure out the port's hiding place without having to resort to the manual once I moved into the brighter light in the kitchen and took off my glasses so I could actually focus on all the tiny black-on-black symbols 'round the phone's edges (I read, knit, hand sew, and investigate miniscule things better without artificial vision aids)

Now that I've replaced a few more of Windows' sound effects with far more meaningful phrases from my stash of Carry On sound clips this kind of auditory confusion shouldn't happen again. ;p

Martina Behm is being a genius again: Pool & Conquer. Now eyeing the hand-dyed variegated yarns in my stash ...

Edited to add: Even better! In Crazy Woman!!!!! (a heavier yarn)

Like I said, Martina Behm is being a genius (again). No, I haven't finished any of the zillion other things in progress but this was just too cool not to use my last free cable to start. Haven't reached the really good bit yet but anticipation has me happy to work through this set-up part (which looks deceptively like the usual beginning of a shawl but isn't). Yarn is some Mountain Colors Weaver's Wool Quarters in "Crazy Woman" colourway that I've had for ages; tried making it into a waistcoat a long time ago but that turned out to not be the right use for this yarn. I think it's going to like being this! :-) 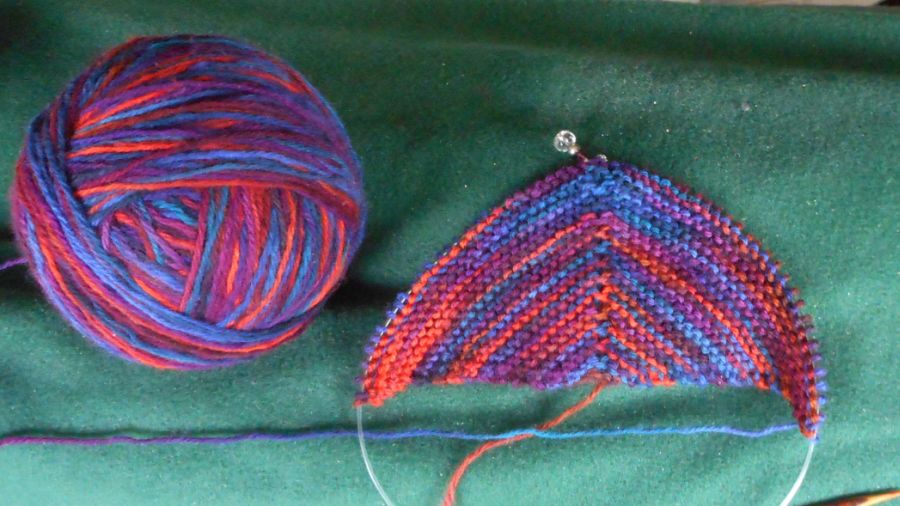