Slowly getting there ... halfway through the twenty-second half-leaf. Once I've done twenty-five I get to turn around and do the second halves of these. In the midst of an interesting colour optical illusion at the moment ... the section I'm in looks brown to both the eye and the camera, but it's actually the slow transition from orange to purple (and is quite obviously those two colours with nary a trace of brown when one gets up close to it). Next is pure purple and then a transition to green. :-)

P.S. If you're seeing veins in those leaves you aren't hallucinating ... they really are there as part of the stitch patterning. 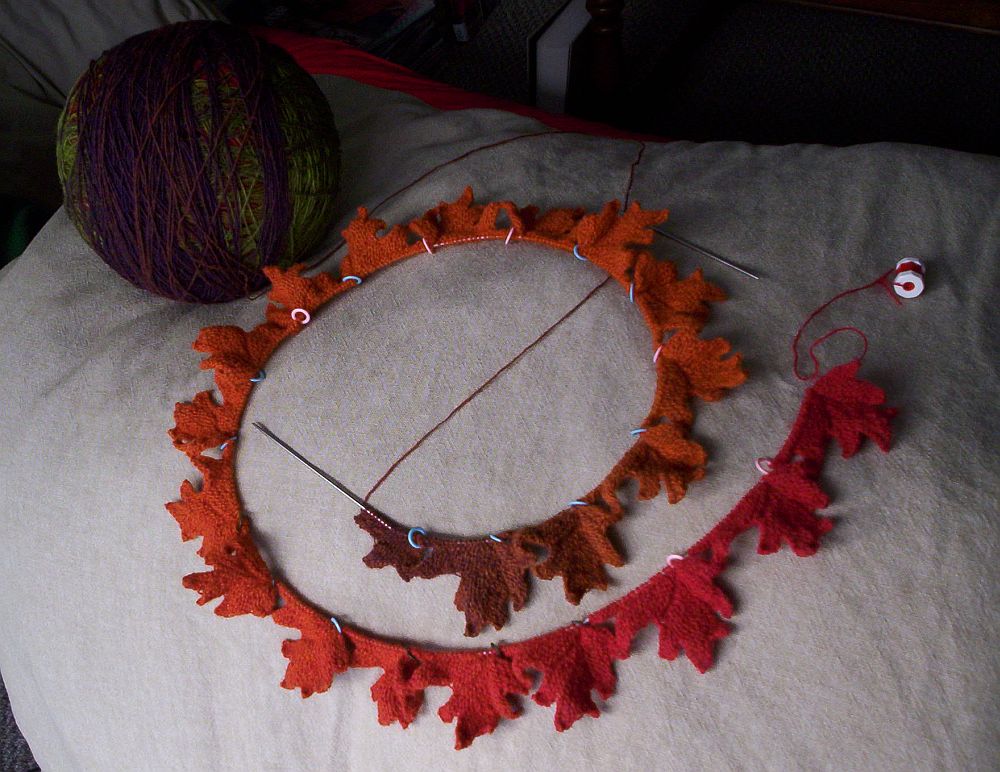 ... that the human body going into overproduction of respiratory gunk and working with fine wool are incompatible (it's not that the wool can't be washed, it's just that a sudden sneeze during a fiddly bit can send tiny stitches flying everywhere) today is for reading instead of leaf-making. Something fluffy. Palin's diaries are light enough but do require being able to recall all the names of everybody ever involved in British television so I'm delving back into The Thorne Smith Reader ebook. Have already re-read "Topper" (which I've owned in hardcover for many years) and finished "The Stray Lamb" (VERY funny and good, BTW) a couple of days ago, so now several chapters into "Turnabout". Having a first chapter titled "Mr. Willows Removes His Socks" was a promising start and it's been getting better and better from there. :-) Lovelovelove Smith's quirky way of describing the characters in his books. In this case the protagonist's boss:

Mr. Gibber was a large man. He gave the impression of being almost too large a man. He had a large, well-fed face coated with an expensively acquired tan. Mr. Gibber collected tans. He brought them back with him from diverse parts of the globe he so ornately decorated. He brought back his tans from Bermuda, from Florida and from various sections of the Riviera.

"There's nothing like travel," he would tell various members of his staff, "to keep a man physically fit and mentally alert. I wish we could all run across to the Continent at least once a year. But everything comes with time-- with time and hard work."

"How true," Tim had once replied to this optimistic utterance. "Even death itself. You know, Mr. Gibber, they tell me that all good Americans go to Paris when they die. Perhaps that's how we'll get there."

Mr. Gibber was not amused.

And Mr. Gibber had hands. Large brown hands that he rubbed and re-rubbed. He was always immaculately dressed, impeccably manicured, and crisply groomed. It was almost as if he wanted to prove to the world that he was a clean man with nice, neat habits.

Tim regarded the man with something akin to affectionate contempt, and Mr. Gibber returned his gaze with the tolerance of one who realised it was in his power to discharge the impertinent young puppy on the spot.
Collapse