P.G. Wodehouse died between the first and second series of "Wodehouse Playhouse" so this is the first episode to lack his introduction; the show's opening titles were altered to include footage of Wodehouse at his typewriter so that his presence at the beginning was maintained.

Series 2, episode 1: "Anselm Gets His Chance" (guest spot by Desmond Llewelyn, the original "Q" from the Bond films)

Made it up to the first Calgary Fibre Arts Fair today ... not a huge event but gotta support and encourage these things in their infancy if one wants to them to happen bigger and better on a regular basis. Came home with the obligatory souvenir tote bag and purchased goodies from local artisans: a set of eight handmade ceramic buttons (which by pure chance match rather nicely to one of the skeins of yarn I picked up) and, from left to right, two skeins of Ancient Arts 4 Ply Fingering/Sock (100% Bluefaced Leicester Wool) in "Cherry Custard" and "Pysanky" colourways and two skeins of Dragonfly Dyewerx Merino DK (100% Merino Wool) in "Purple Wurple". The Ancient Arts brand is new to me; I've knitted a cravat-length scarf from Dragonfly Dyewerx so know how lovely it is to work with (plus I'm a sucker for a really good purple and these skeins are FAR more intense than the camera shows ... so vivid I'm amazed they aren't causing me to see afterimages when I look away from them) Close-up of the buttons 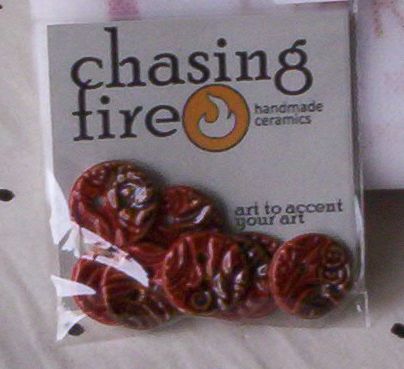