... Baltimore: Chapel of Bones. Wonderful! The final two chapters in this volume brought the graphic tales full circle back to the final confrontation in the original novel and this visual rendering of the ending is just as gripping as the print version was. I liked!

This panel just grabbed me as I read ... a perfect portrait of Baltimore simultaneously at his most crazy and his most sane. 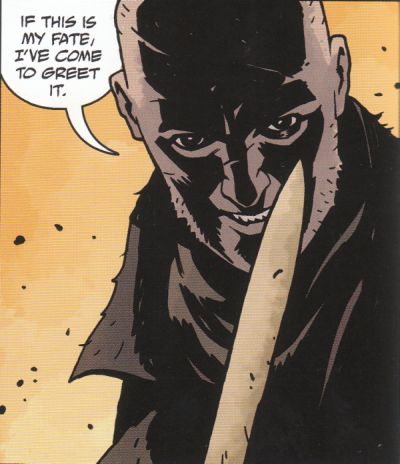 I read The Hollows last night ... the story was interesting, it was good but ... I dunno ... shallow? As in I could tell the writer had loads of depth and motivation and background to the characters and situation in his head as he wrote but was stingy with it on the paper. I don't demand every little detail ... much of the fun in reading a good story is putting together the hints and pieces to figure out the characters oneself. But there's a minimum number of hints and pieces one needs to do this and "The Hollows" didn't quite meet that minimum. Maybe if the original series had been six or eight issues instead of only four ...

But Sam Kieth's art did a great deal to compensate for this ... 'twas some of the most splendiforous I've ever seen from him. A person could just page through looking at the pictures as if the text and dialogue weren't there and still get the entire story. So overall I'm glad I now own this. :-)
Collapse