Three skeins of Tanis Fiber Arts Yellow Label (100% superwash merino) in the "Tartan" colourway. All the colours of iridescence in handy wool form. :-) 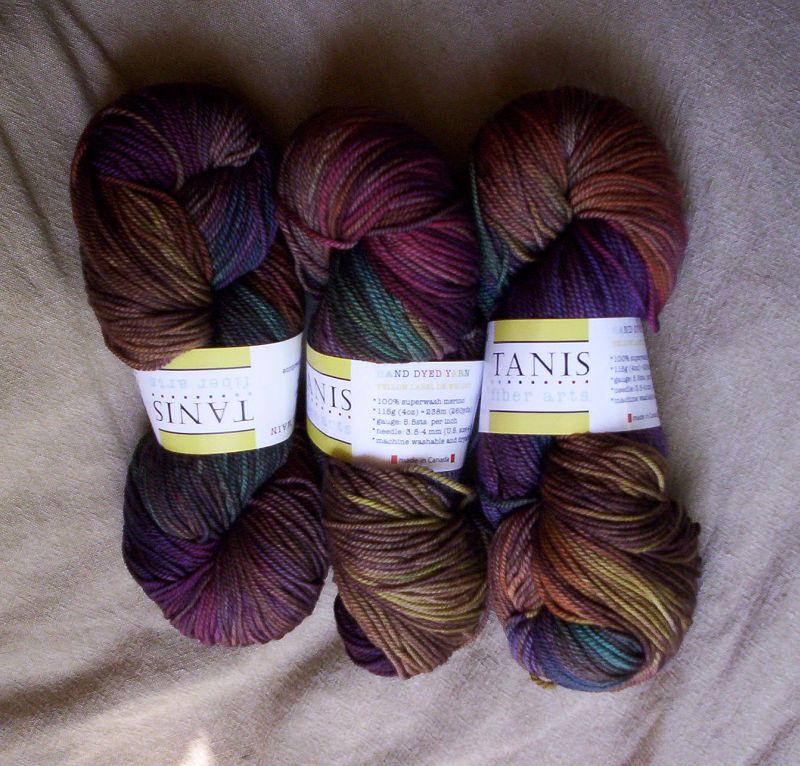 My reading switched from urban fantasy crime set in present-day London to Victorian Scotland Yard via Alex Grecian's The Black Country (which I've now finished), sequel to his The Yard. Main characters Day and Hammersmith are developing their own special brand of dark-humoured camaraderie ... and an aversion to people serving them little "extras" in their food and drink when they're trying to conduct an investigation.

"Of course, he could be trying to kill us after all," Hammersmith said. "And he could decide to try again when he sees it didn't work this time."
"Then we'll arrest him," Day said. "Eat your bread to soak up the drug in your stomach. Eat mine too."
"Thank you, but if you wouldn't mind turning your back for a moment?"
Day turned and pretended to examine the chest of drawers against the window. Hammersmith took a deep breath and stuck a finger down his throat, immediately choking up a small amount of liquid back into the soup bowl. He wiped his lips on his shirtsleeve again and took a long swallow of beer to wash the taste of vomit out of his mouth.
"You are a hardy sort, aren't you?" Day said.
"I do wish people would stop drugging me," Hammersmith said. "I'm going to have to start preparing my own food and I'm a terrible cook, so that's hardly better than submitting to all the poisoning going on around me."

Now moving on to the recently-released third book in this series: "The Devil's Workshop". :-)

Oh, she has my sympathies, she really does ... but still, BWAHAHAHAHAHAHAHA!!!!

Yarn Harlot: The Reason for the Divorce
Collapse