Just checked the weather page to see if there's been any drastic changes in the forecast overnight (that can and does happen here frequently ... one of the joys of living in mountain foothills in a chinook zone). And lo, there not only has been a fairly drastic change (by about 9C ... downwards), but we have yet another big red warning banner this morning. Usually those are for bad storms moving in fast, but today's message is one I've never seen before in all my years of living in chinook territory: "flash freeze warning in effect". This oughta be interesting, as we're now predicted to plummet from +9C to -19C today ...

Devoted a chunk of Christmas and Boxing Day to reading Terry Pratchett's Raising Steam. A lovely, relaxing, laughworthy, thoughtprovoking read (like all Discworld books), though not in the usual style. The previous book, "Snuff", went seriously Austen for a while ... this one seems to follow the style of late 19th century/very early 20th century novels: multiple third person narrative and a simultaneously formal/informal descripton of thoughts and emotions. Think Dickens, Haggard, Doyle, Mrs. Meade. And whoever wrote "Baby Bob" (author's name has escaped me ... an interesting Edwardian tale that begins with two bachelors --no, they are not a couple-- finding an abandoned infant in a railway station waiting room)

I've read a couple of reviews that suggest that the style change might be down to Pratchett's Alzheimer's and it's possible that this is true ... the style could also be perceived as a detailed story outline that never got its final sharpening. But it's consistent from end-to-end and the man is more devious than all his characters put together (has to be ... he wrote 'em) and has already spoofed other narrative styles in the past and what could be more Victorian than steam? So my own suspicion is that it's all on purpose.

I've now got his "The Long War" to read but I think I want to re-read "The Long Earth" first, just to refresh myself on those nowhere-near-as-familiar-as-the-Discworld-gang characters.

P.S. A little diligent Googling, requiring sifting out a ton of hits on Bob Marley, Bob Dylan, and any other famous Bob you can think of and have finally tracked down the author of "Baby Bob" (which I've never known, my mother's copy being one of those by-the-nameless-author-of-other-title editions): Evelyn Whitaker (now off to see what titles of hers are available in digital form)

Calandra is growing rapidly. :-) (just over 40% of the yarn has now migrated from the ball to the shawl) 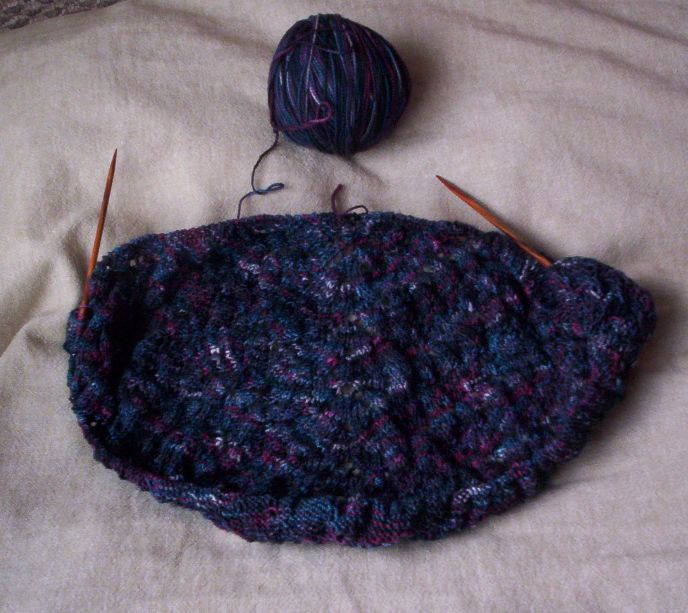 okay, now I've got "from the ball to the shawl" repeating itself inside my head to the tune of Captain's Dan's "From the seas to the streets". This is NOT good ...
Collapse