Some Stephen West wardrobe creativity from last month to bright up your day: Noordermarkt Outfit (just keep reading ... you'll know what I'm chuckling at, besides West having FAR too much fun posing, when you see it ...)

And a little "creativity" from Franklin Habit: You Can Never Tell

While Kate Davies visits a marvelous textile collection during A Day at Gawthorpe and then investigates Foula Wool and the ancient and colourful sheep breed it comes from.

My entry in Skittaleum Eruptus. Now grown to a point where the image is starting to look like an image instead of as if I'd screwed up and put a few random stitches in the wrong colour on each side. At the moment it's mainly the middle of a clock face ... in the top photo the three horizontal bars towards the right are the Roman numeral "3" with the small hand of the clock pointed toward it, with the Roman "4" below that, and the base of the larger clock hand projecting below the centre (it's pointed towards 11) ... and with a couple of small gears floating in front of it on the left. On the predominantly green side the clock face is reversed. This is twenty-two rows into the first of seven eighty-four-row charts, so I've a ways to go yet in this first attempt at double knitting (which has turned out to be an astonishingly simple "trick" of yarn manipulation). 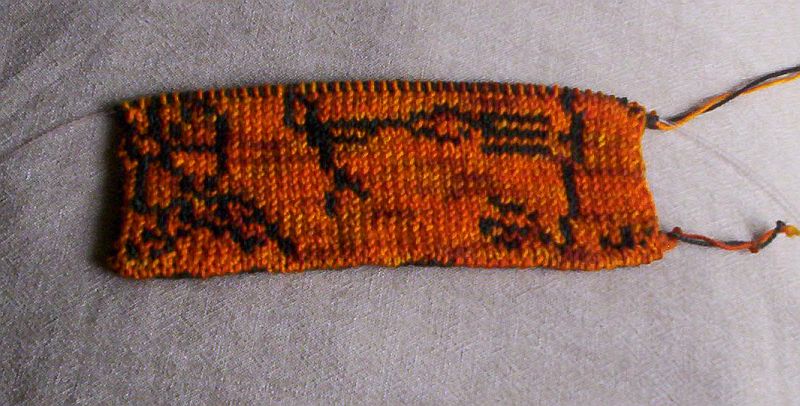 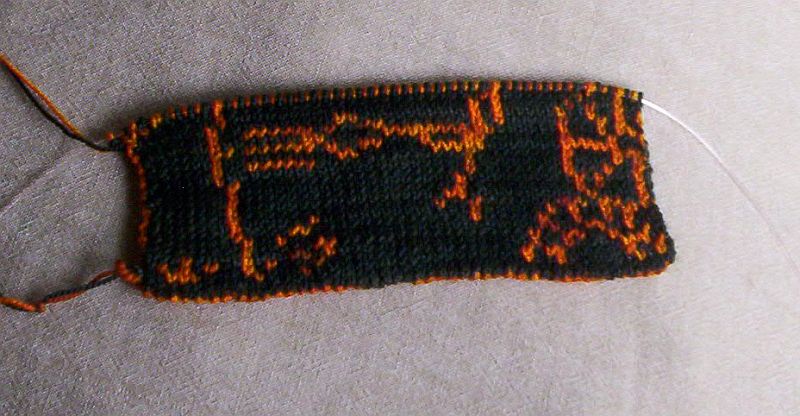 ... is the late Peter O'Donnell's great creation, Modesty Blaise, quite possibly one of the best and well-rounded female fictional characters ever written. Though she was originally created as a daily comic strip character, I came across and devoured the novels first ... aside from an occasional sample strip in histories of comics I never had the opportunity to read the original tales until Titan Books started releasing them in chronological volumes a few years ago. Amazingly Modesty and her righthand man Willie Garvin work well in both media ... O'Donnell kept the characters consistent across both versions, using the visual to explore them via their actions and print to get deeper into their thoughts/motivations. You can read one or the other or both and won't come across any inconsistencies ... Modesty is Modesty and Willie is Willie no matter where they are.

Modesty's background is an interesting mystery, both to others and to herself (here's O'Donnell's RL encounter that he later used as the basis for Modesty's own history) ... she's unsure of her actual name or age and so has arbitrarily chosen her own monicker and birthday, she's smart and pulled off an audacious plan to gain her own personal and financial independence by temporarily taking control of a crime syndicate, then retired from that to live an "honest" life once she met her goals. Sounds like a rather far stretch as I type this, but O'Donnell has made this whole backstory absolutely believable. Willie became her trusted and devoted lieutenant during her shady days and chose to also go straight at the same time as she did rather than work for anyone else. The pair aren't, never have been, and never will be lovers (they both find the notion hilarious and pursue separate love lives), but they have quite realistically become and remain the best of friends, with absolute respect for and trust in each other. He's "Willie love" to her and she's always "Princess" to him. The pair aren't perfect ... they each have their strengths and weaknesses and reasons they really need each other. And they've both learned that leading safe lives is far too boring if they don't spice things up with adventure once in a while. So being approached by Tarrant of the British Secret Service, who needs a little under-the-radar favour, is the beginning of something splendid ...

BTW, for fans of Charles Stross' "Laundry Files" books: the two "guest" characters in the latest (fourth) volume "The Apocalypse Codex" are tributes to Modesty and Willie ... there's a ton of inside jokes in that novel for those who've read O'Donnell's originals. ;-)

The novels (and a couple of volumes of short stories) in the Modesty Blaise series, in order, are:
Modesty Blaise
Sabre-Tooth
I, Lucifer
A Taste for Death
The Impossible Virgin
Pieces of Modesty
The Silver Mistress
Last Day in Limbo
Dragon's Claw
The Xanadu Talisman
The Night of Morningstar
Dead Man's Handle
Cobra Trap (do NOT read this last volume until you've read all the others; just ... trust me on this)