Read the quote from the newest issue of "Wolverine and the X-Men" ;-)

Have been thinking on which other authors/series I'm seriously addicted to. And decided today belongs to Arturo Pérez-Reverte's "Alatriste" novels. I posted this quote years ago when I first read the book it's from, but I'll repeat it here because it remains, for me, one of the most powerful passages that Pérez-Reverte has ever written (and this is a man who writes pretty much cover-to-cover powerful all the time). From "The Sun Over Breda" (which is set in the front lines of the Flanders War):
( Collapse )

The translated-to-English titles in this series, in order, are:
Captain Alatriste
Purity of Blood
The Sun Over Breda
The King's Gold
The Cavalier in the Yellow Doublet
Pirates of the Levant

(Hoping the seventh volume will be available in English soon; despite their popularity there tends to be a 3-4 year lag after the original release in Spain because Pérez-Reverte writes this series in 16th century Spanish rather than modern)

... to tie up yet another pair of needles with something new. But Hasmi kept saying how eager she was to see how the two colourways looked together (these two are mirrors ... the same colours are in both balls, but in opposite proportions). Just call me easy when it comes to indulging an enthusiastic dyer (who lives within driving distance and knows my address because she mails yarn to me, thus could ambush me if the notion struck her) 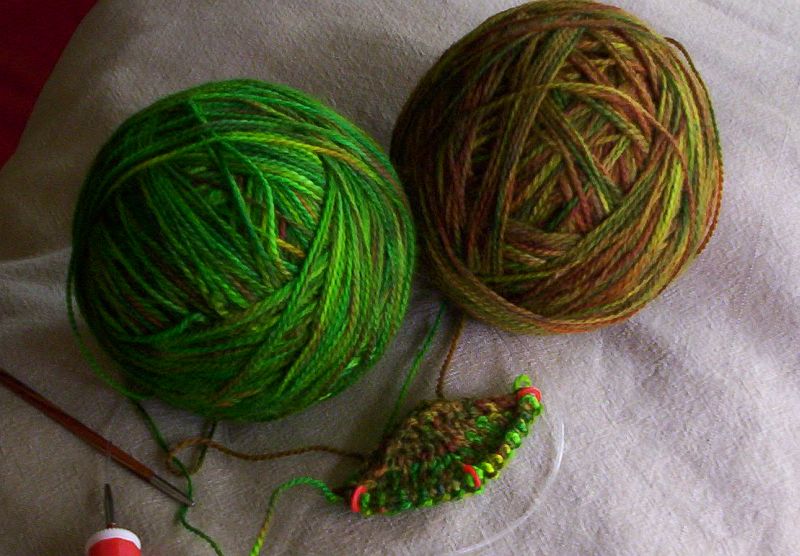