From Kate Davies' blog: Actual O W L S ('cause owls are fascinating, plus it's naturally a significant bird to the person who's famed for designing this)

And a bonus, 'cause Davies lives near the BEST scenery (and is about to move house right into it): Looking Forward (references to recovering strength are because of this)

The beginnings of the Bamf kit came in the mail today. Dyed by you-know-who. From left to right:
Black: Did I Listen To Pop Music Because I Was Miserable? Or Was I Miserable Because I Listened to Pop Music? (High Fidelity)
Red: Only the Exact Phrase I Used Was "Don't" (Firefly)
Blue: TARDIS (Doctor Who)
Grey: Don't Blink (Doctor Who) ... yeah, I know the gloves and boots should be white, but it was the lightest colourway currently in stock and I wanted to see if it was a high enough contrast to the dark shades that I could get away with it. It is possible ... but I may end up special ordering "Oooo Shiny!", which is a lighter grey (have to check if that's still on the regular colour chart). As I said in another forum, I'll just claim he was out boozing with Wolvie and fell over a few times. ;-) (the other alternative is trying for a pale version of "Tweety of Versailles", in which case the story is out boozing with Wolvie too many times and falling over a LOT, with uniform getting yellowed after too many times through the X-laundry) 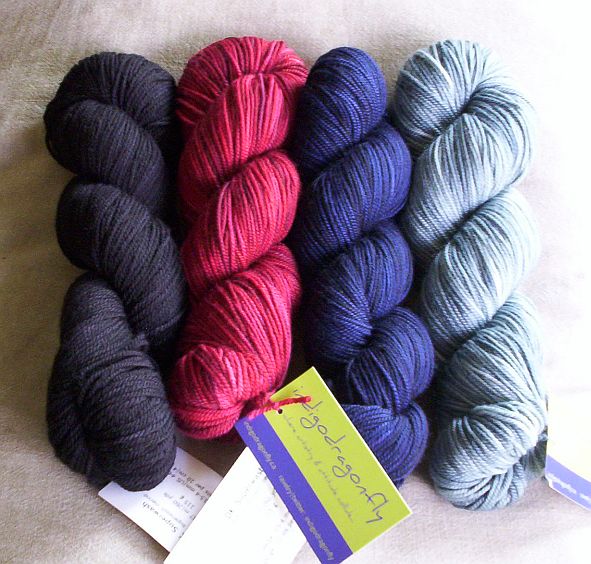