In honour of World Wide Knit in Public Day (which is, apparently, 192 hours long .... must be the NEW new math), the Indigodragonfly folks are performing their annual yarn auction event, which means custom colourways being designed and dyed in front of an audience (the naming/inspiration rights part of the auction has already happened ... today people bid on the actual finished yarn).

In past years the proceeds of the event have been for charity; this year the hosting yarn store has decreed Studiopalooza ... which is certainly a good cause too (after all, proper quarters means future charity stuff, as well as business, can be done on a larger scale). If you'd like to see how colourways come into existence, there's an official thread in the Ravelry Indigodragonfly group (accessing this will require registering in Rav ... free, no obligation to be a fibre fiend, and they never ever send emails after confirmation), or there are several folks that will be livetweeting the event with photos:
Indigodragonfly herself (though she's gonna be pretty busy so her reports will be erratic)
JoeysHouse (monster wrangler and responsible for ensuring there are squirrels on the premises)

P.S. Since the local forecast is for rain (and high odds of it being in thunderstorm form) for most of the day, my living room is as public as my own knitting is getting today. Since I already frequently knit on coffee breaks at work, at the hairdresser, and at assorted bus stops, restaurants and coffee shops around the city, any old day of the year, I figure I've done my bit for the craft. ;-)

BTW, there is a five-word, mid-sentence phrase that my absolute evilest of evil sides has been dying to include in these for months. Sans volume number or title just because those five words would most likely drive the catch-up readers insane plus have them up all night(s) frantically reading to find out what the hell happened (and the sleep deprivation would only aggravate the crazy). The prospect of watching that happen is so SO tempting!

Just wanted you to know that I do have some restraint. Sometimes. ;p

... which, apparently, is enough to convince the camera that the rest of the room is pitch black. Twenty more rows of "Vicious Penguin" and then "Goth to a Flame" (which I wound last night) will join the fun. 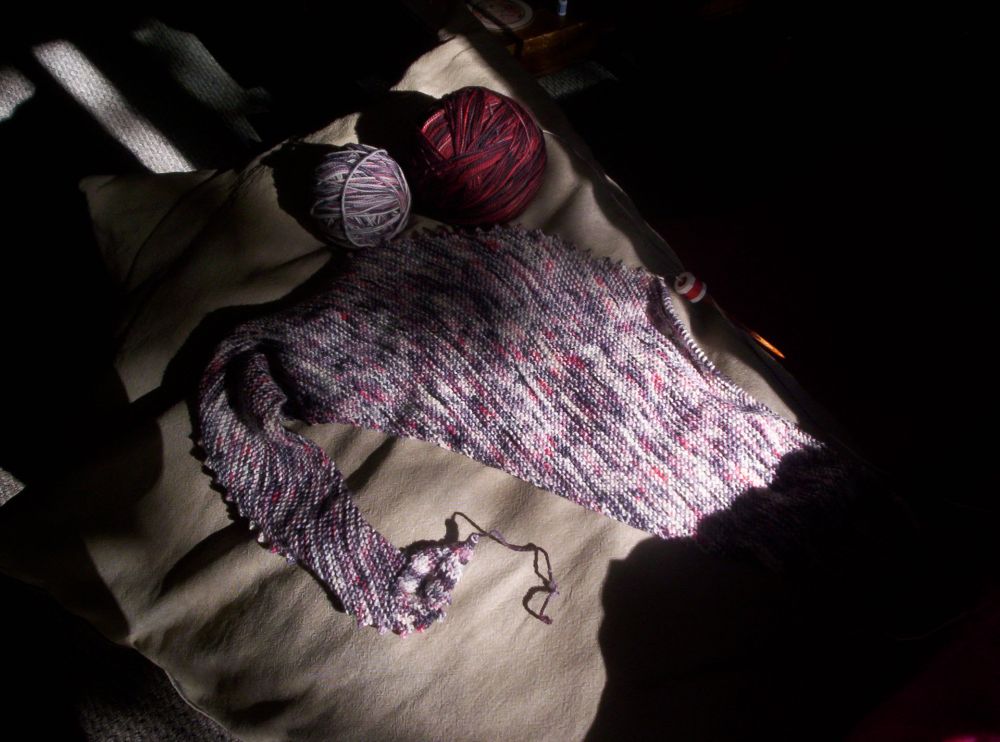 ... something to try once you've finished that afghan ***GRIN***: Blinking Peacock
Collapse