... that makes a somewhat addled mind decide that what it needs to do is something complicated. The jury is still out on whether it was oxygen deprivation caused by sinuses and lungs having really taken against the whole breathing thing, the bug itself (if bug it was ... the root cause of whatever hit me may have been the unusually-weird-even-for-here weather), fever ('cause I'm sure I was running a bit of one), or all these combined plus who knows what all else, but late Christmas Eve I got the sudden notion that it'd be a really good idea to grab my extremely slippery silk/merino and cast on 379 stitches (yes, you read that right) to begin Ann Hansen's Pea Vines. The large version.

Three days and eight looooonnnnnnnnggggggg pattern rows later ... so far, so good (translation: the stitch count is still what it should be and everything appears to look as it should). Considering how often it's been abruptly dropped due to a sudden need for tissues and/or liquids, this is amazing. Still hacking and sniffling, BTW, though significantly less than when this all began ... between that and Ma Nature being in a human-hostile mood, I've been staying holed up inside reading and stitch juggling and watching my way through DVDs I haven't dug out for a while. There's nothing so relaxing as much-needed unlaxing (and using that word reminds me that I oughta also dig out and re-read "Shottle Bop" ... love that story).

Tomorrow the temperature is supposed to rise up to something civilized, so shall haul m'self out and about a bit. 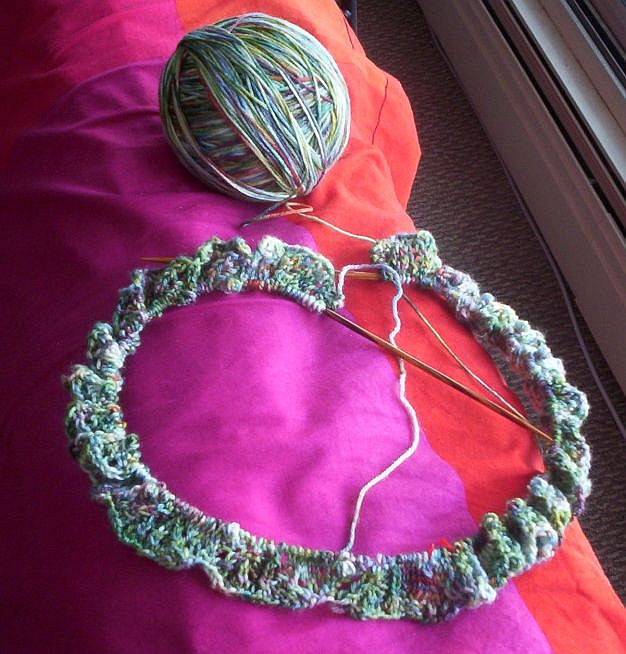